As discussed earlier, the OSI model was created to promote communication between devices of various vendors. It also promotes communication between disparate hosts such as hosts using different operating platforms (Windows, OSX, Linux, etc.). Remember that you are very unlikely to ever work on a system that uses protocols conforming to the OSI reference model.  But it is essentially to know the model and its terminology because other models such as the TCP/IP model are often compared to the OSI reference model. Hence the discussion on this model will be limited compared to the discussion on the TCP/IP model.

The OSI reference model, like most other network models, divides the functions, protocols, and devices of a network into various layers. The layered approach provides many benefits, some of which are:

The OSI reference model has seven such layers that can be divided into two groups. The upper layers (Layers 7, 6 and 5) define how applications interact with the host interface, with each other, and the user. The lower four layers (Layers 4, 3, 2 and 1) define how data is transmitted between hosts in a network. Figure 1-7 shows the seven layers and a summary of their functions. 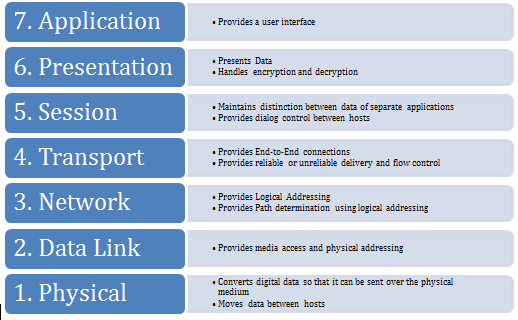 he sections below discuss each layer in detail.

In a host, different applications or even different instances of the same application might request data from across the network. It is the Sessions layer’s responsibility to keep the data from each session separate. It is responsible for setting up, managing and tearing down sessions. It also provides dialog control and coordinates communication between the systems.

Where the upper layers are related to applications and data within the host, the transport layer is concerned with the actual end-to-end transfer of the data across the network. This layer establishes a logical connection between the two communicating hosts and provides reliable or unreliable data delivery and can provide flow control and error recovery. Although not developed under the OSI Reference Model and not strictly conforming to the OSI definition of the Transport Layer, typical examples of Layer 4 are the Transmission Control Protocol (TCP) and User Datagram Protocol (UDP). These protocols will be discussed in great detail later in this chapter.

While the Network layer deals with data moving across networks using logical addresses, Data Link layer deals with data moving within a local network using physical addresses. Each host has a logical address and a physical address. The physical address is only locally significant and is not used beyond the network boundaries (across a router). This layer also defines protocols that are used to send and receive data across the media. You will remember from earlier in the chapter that only a single host can send data at a time in a collision domain or else packets will collide and cause a host to back off for sometime. The Data Link layer determines when the media is ready for the host to send the data and also detects collisions and other errors in received data. Switches function at this layer.

This layer deals with the physical transmission medium itself. It activates, maintains and deactivates the physical link between systems (host and switch for example). This is where the connectors, pin-outs, cables, electrical currents etc. are defined. Essentially this layer puts the data on the physical media as bits and receives it in the same way. Hubs work at this layer.

In the previous sections you learned about various layers of the OSI reference model. Each layer has its distinct function and it interacts with the corresponding layer at the remote end. For example, the transport layer at the source will interact with the transport layer of the destination. For this interaction, each layer adds a header in front of the data from the previous layer. This header contains control information related to the protocol being used at that layer. This process is called encapsulation. This header and the data being sent from one layer to the next lower layer is called a Protocol Data Unit (PDU). Figure 1-8 shows how data gets encapsulated as it travels from layer 7 down to layer 1. 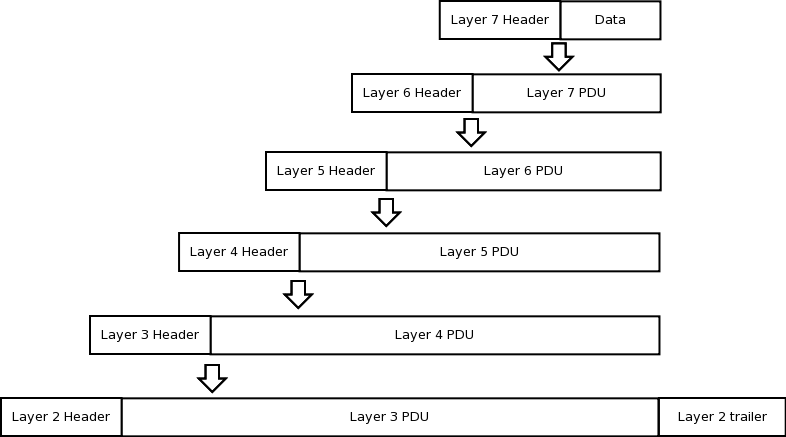 At the receiving end, Layer 1 takes the data off the wire and sends it to Layer 2. Here the Layer 2 header and trailer are examined and removed. The resulting Layer 3 PDU is sent to Layer 3. Layer 3 in turn examines the header in the PDU and removes it. The resulting Layer 4 PDU is sent to Layer 4. Similarly, each layer removes the header added by the corresponding layer at the source before sending the data to the upper layer. Finally the Application layer removes the Layer 7 header and sends the data to the application. This process of examining, processing and removing the header is known as decapsulation.

Exam Alert: It is very important to remember the Layer names, their functions and the encapsulation process. You can use a common mnemonic to remember the layer names and their sequence – All People Seem To Need Data Processing.  This is an important concept on your CCNA exam.