Ethernet in the term used for a family of standards that define the Network Access layer of the most common type of LAN used today. The various standards differ in terms of speeds supported, cable types and the length of cables. The Institute of Electrical and Electronics Engineers (IEEE) is responsible for defining the various standards since it took over the process in 1980.

To make it easier to understand Ethernet, its functions will be discussed in terms of the OSI reference models’ Data Link and Physical layers. (Remember that Network Access Layer is a combination of these two layers).

IEEE defines various standards at the physical layer while it divides the Data Link functions into the following two sublayers:

Even though various physical layer standards are different and require changes at the layer, each of them use the same 802.3 header and the 802.2 LLC sublayer.

The following sections look at the collision detection mechanism used by Ethernet and how Ethernet functions at both the layers.

Ethernet is a contention media access method that allows all hosts in a network to share the available bandwidth. This means that multiple hosts try to use the media to transfer traffic. If multiple hosts send traffic at the same time, a collision can occur resulting in loss of the frames that collided. Ethernet cannot prevent such collision but it can detect them and take corrective actions to resolve. It uses the Carrier Sense Multiple Access with Collision Detection (CSMA/CD) protocol to do so. This is how CSMA/CD works:

CSMA/CD works well but it does create some performance issues because:

Remember that switches break collision domains by providing a dedicated port to each host. This means that hosts connected to a switch only need to wait if the switch is sending frames destined to the host itself.

Half and Full Duplex Ethernet

In the previous section, you learned about the logic called Half Duplex in which a host can only send or receive at one time. In a hub-based network, hosts are connected in a half-duplex mode because they must be able to detect collisions.

When hosts are connected to a switch, they can operate at Full duplex. This means they can send and receive at the same time without worrying about collisions. This is possible because full duplex uses two pairs of wire instead of one pair. Using the two pairs, a point-to-point connection is created between the transmitter of the host to the receiver of the switch and vice versa. So the host sends and receives frames via different pairs of wires and hence need to listed to see if it send frames or not. You should note that CSMA/CD is disabled at both ends when full duplex is used.

Apart from eliminating collisions, each device actually gets to use twice the bandwidth available because it now has same bandwidth on both pairs of wire and each pair is used separately for sending and receiving.

Figure 1-17 shows how the transmitter on the host’s interface card is connected to the receiver on the switch interface while the receiver on the host interface is connected to the transmitter on the switch interface. Now traffic sent by the host and traffic sent to the host both have a dedicated path with equal bandwidth. If each path has a bandwidth of 100Mbps, the host gets 200Mpbs of dedicated bandwidth to the switch. In case of half-duplex, there would have been only a single path of 100Mbps that would have been used for both receiving and sending traffic.

Ethernet at the Data Link Layer

Ethernet at Data Link layer is responsible for addressing as well as framing the packets received from Network Layer and preparing them for the actual transmission.

Ethernet Addressing identifies either a single device or a group of devices on a LAN and is called a MAC address. MAC address is 48 bits (6 bytes) long and is written is hexadecimal format. Cisco devices typically write it in a group of four hex digits separated by period while most operating systems write it in groups of two digits separated by a colon. For example, Cisco devices would write a MAC address as 5022.ab5b.63a9 while most operating systems would write it as 50:22:ab:5b:63:a9.

A unicast address identifies a single device. This address is used to identify the source and destination in a frame. Each LAN interface card has a globally unique MAC address. The IEEE defines the format and the assignment of addresses.

To keep addresses unique, each manufacturer of LAN cards is assigned a code called the organizationally unique identifier (OUI). The first half of every MAC address is the OUI of the manufacturer. The manufacturer assigns the second half of the address while ensuring that the number is not used for any other card. The complete MAC address is then encoded into a ROM chip in the card. Figure 1-18 shows the composition of a MAC address.

When the Data Link layer receives a packet from the Network layer for transmission, it has to encapsulate the packet in frames. These frames are used to identify the source and destination device by the switch. It also tells the receiving host how to interpret the bits received by the physical layer.

The framing used by Ethernet has changed few times over the year. Xerox defined the original frame. When IEEE took over Ethernet in early 1980s it defined a new frame. In 1997 IEEE finalized the Ethernet frame that took a few components from the Xerox definition and a few from IEEE’s original frame. The finalized frame is shown in Figure 1-19. Table 1-2 lists the fields in the frame, their size and a brief description.

The Length/Type field is something you need to understand a little more about. The type field is very important because it tells the receiving end about the protocol whose data is contained in the frame. If the value of the field is less than a hex value of 0600 (decimal value 1536), it signifies that the field is used as a length field in that frame. For cases where this field is used as a length field, either one or two additional headers are added after the Ethernet 802.3 header, but before the layer 3 header. When IP packets are being carried, the Ethernet frame has the following two additional headers:

Figure 1-20 shows an Ethernet frame with these two additional headers.

Exam Alert: It is not necessary to remember the fields of the frame. Just remember why LLC and SNAP headers are used for your CCNA exam.

Ethernet at the Physical Layer

Ethernet was originally implemented by a group comprised of Digital, Xerox and Intel (DIX). IEEE then took over and created the 802.3 standard. This was a 10Mbps Ethernet that used co-axial cables.

On the other hand the Electronics Industries Association and the newer Telecommunication Industries Alliance (EIA/TIA) is the standards body that creates the physical layer specifications for Ethernet. It specifies that a registered jack (RJ) connector with a 4 5 wiring sequence on an unshielded twisted-pair (UTP) cabling should be used with Ethernet. This cable comes in categories where higher category has less of the following two problems associated with them:

What this means is that category 5 cable has lesser attenuation and crosstalk than category 3 cables.

Now that you know about the standards bodies involved and what they have done, it is time to look at the various Ethernet standards. Table 1-3 lists the original 3 standards. Remember that each standard is different in terms of Speed, Cable and the Maximum Length of cables.

The three cabling types are discussed below:

Straight-Though – A UTP cable has 8 wires. A straight-through uses 4 out of these 8 wires. Figure 1-21 shows the configuration of the wire on both ends in a straight-through cable. Notice that only wires 1, 2, 3 and 6 are used and they connect straight to corresponding number on the other end.

Crossover – Crossover cable also uses the same four wires that are used in straight-through cable but different pins are connected here. Figure 1-22 shows the configuration of the wires in a crossover cable.

Crossover cable is used to connect:

Any easy way to remember this is that similar devices are connected to each other using crossover cables.

Rolled Cable – A rolled cable cannot be used for any Ethernet connection.  It is used for connecting to a router’s or a switch’s console port from your host’s serial communication (com) port.  Every Cisco router and switch has a console port that is used for initial configuration. All 8 wires are used in this cable and each wire connects to the opposite number on the end (1 to 8, 2 to 7, 3 to 6 etc). Figure 1-23 shows the wire configuration.

Exam Alert: Cable types and where they are used is a very important topic not only for the CCNA Exam as you will see questions on it, but also for your networking career as well.

The last thing you need to know about TCP/IP model is the Data encapsulation process and PDUs. As in case of the OSI reference model, the data is encapsulated in a header (and trailer in case of Network layer) to create a Protocol Data Unit (PDU) and is passed down to the next layer. Though you are aware of the process, you must know the names of each layer’s PDU. The PDU in TCP/IP model are: 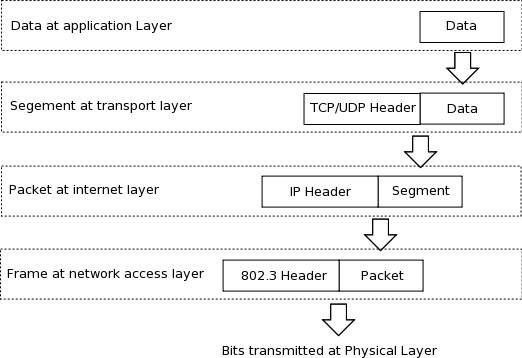