Network Address Translation (NAT) allows a host that does not have a registered IP address to communicate with other hosts on the Internet. NAT has gained such wide-spread acceptance that the majority of enterprise networks today use private IP addresses for most hosts on their network and use a small block of public IP addresses, with NAT translating between the two.

Having come this far in your CCNA studies, you should be well aware of the IP header format. The IP packet header has several fields in it, the most well-known of which probably are the Source IP Address and Destination IP Address. NAT simply translates, or changes, one or both of these addresses inside a packet header as the packet passes through the router performing the NAT operation. This is what basic NAT operation is, nothing more, nothing less.

NAT is a feature that allows the internal network of an organization to appear to be using a different IP address space from the outside than what it is actually using. Thus, NAT allows an organization to use private IP addresses that are not globally routable and yet connect to the Internet by translating those private addresses into globally routable addresses. The beauty of NAT is that the hosts on the internal network using NAT to communicate to the outside world don’t have to be aware of the very existence of NAT. NAT configuration exists only on the router or another device typically at the boundary of the internal network. Due to this aspect of NAT, an organization can also change service providers without any changes to the IP addresses configured on individual hosts. Changing service providers also changes public IP addresses available to an enterprise. The device performing NAT can have its configuration modified and that’s all you need to do while changing your ISP.

Network Address Translation (NAT) is defined in RFC 1631. The original intention of NAT was to slow the depletion of available IP addresses by allowing many private IP addresses to be represented by some smaller number of public IP addresses. NAT was envisioned to be a temporary solution to the problem of IP version 4 address depletion. The permanent solution was a migration from IP version 4 to IP version 6 (IPv6). IPv6 has 128-bit addresses and a much larger address space expected to solve the issue of address scarcity forever. But NAT has been so successful that it has delayed the full IPv4 address exhaustion by several years.

There are organizations that already have registered IP addresses for hosts on an internal network but they want to hide those addresses from the Internet so that hackers cannot easily attack those hosts. If the host address is hidden, a degree of security is achieved. NAT can be useful in this situation where the motive is not primarily IP address preservation, but applying corporate security policies to your network traffic.

A major advantage of NAT is that it needs to be configured only on those few routers that would actually perform the NAT operation. The hosts or other routers not performing NAT operation don’t need any configuration changes.

Network Address Translation (NAT) is all about changing IP addresses and port numbers inside an IP packet header which also creates some issues. Changing the content of an IP address or TCP port can change the meaning of some of the other fields, especially the checksum. For example, the checksum of an IP packet is calculated over the entire IP header. Therefore if the source or destination IP address (or both) change, the checksum has to be calculated again. The same is also true for the checksum in the TCP header. This number is calculated over the TCP header and data, and also over a pseudo-header that includes the source and destination IP addresses. Therefore, if an IP address or a port number changes, the TCP checksum must also change. NAT as implemented on Cisco routers performs these recalculations. This is extra work for the router performing NAT.

As a matter of fact, Cisco’s NAT implementation goes beyond translating addresses in the IP header for the applications it supports. For the supported applications carrying IP address information in the application data, NAT makes the appropriate corrections to the data as well. This prevents the application from breaking due to NAT.

However, if the data fields are encrypted, NAT has no way of reading the data. Therefore, for NAT to function properly, neither the IP addresses nor any information derived from them (such as the TCP header checksum) can be encrypted. But this is not the case with virtual private networks (VPNs), for example, IPsec. With certain modes of IPsec, if an IP address is changed in an IPsec packet, the IPsec becomes meaningless and the VPN is broken. When any sort of encryption is used, you must perform NAT on the secure side before encryption, rather than in the encrypted path.

NAT is also viewed sometimes as part of a security plan, because it hides the details of the inside network from the outside world. A host with translated address may appear on the Internet with one address one day and with a different address on another day. But keep in mind that this is very weak security at best. It might slow down an attacker who wants to hit a particular host but it will not stop him if he is determined.

NAT Inside and Outside Addresses

Let’s define a few basic but important terms in the context of NAT. Before we jump into the definitions, have a look at Figure 10-1 in order to understand the context in which NAT typically operates.

Given these four terms, an address may be one of four types:

In general, NAT is configured on a Cisco router that connects only two networks, and translates the inside local (private) addresses from the internal network into inside global (public) addresses. In most common scenarios the outside addresses are not translated so outside global and outside local addresses are the same. You can configure NAT in a way that it will advertise only a single address for your entire network to the outside world. Doing this effectively hides the addresses in your internal network from the hostile environment of the Internet.  Thus, giving you some additional security and peace of mind as network administrator.

NAT has the following types:

We will learn how to configure each of these three types of NAT in this chapter.

Let’s have a look at Figure 10-2 that present a basic NAT scenario. We will explain the basics of NAT operation with the help of this scenario and the understanding you develop here should also help you understand the rest of the chapter. 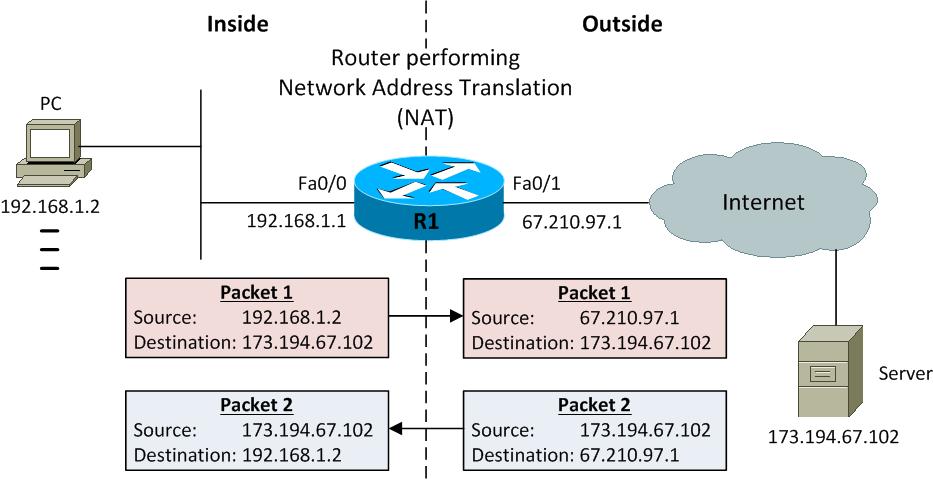 We have defined several terms related to NAT so far. It’s the right time to test that understanding in the context of Figure 10-2. R1 is the router performing NAT and has two interfaces: Fa0/0 as the inside interface while Fa0/1 is the outside interface. A PC having IP address 192.168.1.2 on the inside needs to communicate with a server having IP address 173.194.67.102 on the outside.

Let’s try to understand what happens to IP packets travelling back and forth between the PC and the server as they move across R1 – the router performing NAT operation. In plain simple words IP addresses in the header of those IP packets get re-written with R1 also keeping a record of these re-writes or translations in a table known not surprisingly as translation table.

In the coming sections we would learn in detail how to actually configure Network Address (NAT) on a Cisco router for all three types of NAT.