The OSI Layer 1, or physical layer, defines the specifics of moving data from one device to another over a medium. No matter what type of data is sent, eventually the sender of data needs to actually transmit the bits to another device in the form of physical signals or waveforms. The OSI physical layer defines the standards and protocols used to make the physical transmission of bits across a network possible.

Poit-to-point WAN links provide basic connectivity between two sites, as shown in Figure 12-1. In order to get a point-to-point connectivity, you would engage a service provider to install a circuit. The service provider would provision a point-to-point link or circuit and also install devices at both ends of the circuit. This kind of point-to-point WAN connection is also called a leased circuit or leased line because it is always available and you have the exclusive right to use it as long as you keep paying for it.

The technologies used by the service provider to build its network to support your point-to-point WAN link are complex. Fortunately, you don’t need to spend time studying and learning those technologies as they are outside the scope of your CCNA exam. You can conceptually view the point-to-point WAN link as if the two routers R1 and R2 are connected back-to-back. Most of the time, all you are concerned with is the type of interface provided by the CSU that connects to your router and the speed of the leased circuit. This simplified view of a point-to-point WAN link serves you well for your CCNA exam as well as real life work as network engineer. However you will be introduced to a few basic concepts and terms related to service providers in the coming paragraphs.

Typically, the router connects to a device called a channel service unit/data service unit (CSU/DSU). The CSU/DSU is usually a standalone unit installed and maintained by the service provider and looks somewhat like an external dial-up modem. The CSU/DSU is usually placed in the same rack as the router and connects to the router with a relatively short cable, typically less than 50 feet long. The much longer cable that runs from the central office (CO) to the customer premises plugs into the CSU/DSU. Older leased line technologies used four wires or two pairs of wires but modern technologies allow the use of a single pair just like a telephone line. Sometimes the CSU/DSU is also integrated into the router and the leased line terminates directly at an interface on the router. This cable connects the CSU/DSU to the telco switch in the nearest CO and can be several kilometers long.

The router and CSU/DSU typically are two separate physical devices. However, Cisco also manufactures WAN interface cards (WICs) with integrated CSU/DSU, eliminating the need for a separate CSU/DSU. An example is the WIC-1DSU-T1 (and WIC-1DSU-T1-V2) which is a CSU/DSU WAN interface card by Cisco for T1 or fractional T1 service. The WIC-1DSU-T1 installed in a Cisco router provides a simple and fully integrated solution from a single vendor. The WAN connectivity is provided through the standard RJ-45 interface connector on the card. The configuration is performed via the familiar Cisco IOS CLI and there is no need to learn the command syntax of an external CSU/DSU from another vendor. It obviates the external CSU/DSU affording ease of deployment, configuration, and management.

The term customer-premises equipment (CPE) is commonly used by telcos to refer to the equipment installed at the customer site. For example, the LAN switch, router, and CSU/DSU are classified as CPE in Figure 12-1.

From a legal perspective, two different companies own the various components of the equipment and lines in Figure 12-1. For instance, the router along with the cable connecting the router to CSU/DSU is typically owned by the customer. The CSU/DSU, the wiring from CSU/DSU to the CO and the gear inside the CO are all owned by the telco. The telco uses the term demarcation point or demarc to refer to the point at which the telco’s responsibility is on one side and the customer’s responsibility is on the other. The demarc is not a separate device, but rather a concept of where the responsibilities of the telco and customer separate. There may be different ways to establish the demarc in different countries by different service providers. In some cases, the telco also owns and manages the router in addition to the CSU/DSU. In some cases, the CSU/DSU and router are both owned by the customer. The demarc point shifts according to the specific ownership terms of a scenario. The term CPE still refers to the equipment at the customer’s location regardless of ownership. 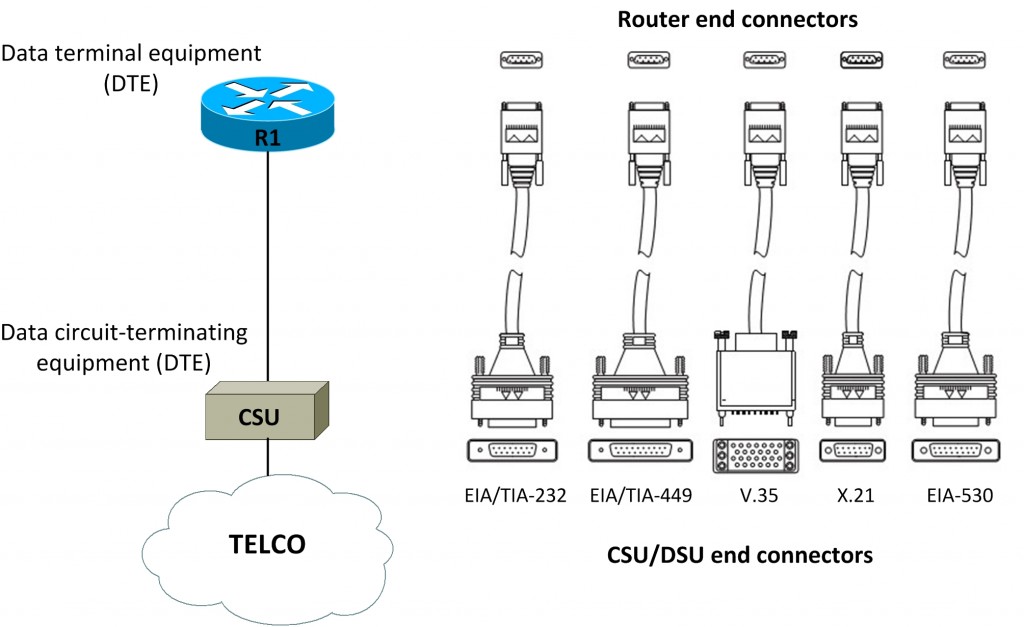