IP version 4 (IPv4) has been a core part of the TCP/IP protocol suite and has served well during tremendous growth of the Internet. IPv4, mostly called just IP, defines addressing and routing for most corporate networks that use TCP/IP as well as the public Internet. Though IPv4 has been a long-time companion, it has its shortcomings that created the need for a protocol that could replace IPv4. That protocol is Internet Protocol version 6 or IPv6 for short. IPv6 defines the same general functions that are defined by IPv4. However, there are differences in detail that we will explore in this chapter.

IP version 6 (IPv6) serves as the protocol that will eventually replace IP version 4 (IPv4). The most obvious reason for migrating TCP/IP networks from IPv4 to IPv6 is growth. IPv4 uses a 32-bit address, which allows for a little over four billion addresses. It may seem like a pretty large number of addresses but the immense growth of networks and the Internet has almost exhausted our stock of available IPv4 addresses for new deployments. IPv6 uses 128-bit addresses and increases the number of available addresses to 2^128, a number so large that we don’t have a word for it.

The change from IPv4 to IPv6 is not just about one protocol being replaced by another; it impacts many other protocols as well. In this super-sized chapter, we start by introducing IPv6 addressing and routing, also discussing troubleshooting of the same. We then cover OSPFv3 (Open Shortest Path First Version 3) and EIGRPv6 (Enhanced Interior Gateway Routing Protocol for IPv6), in detail.

The core IPv6 protocol, defined in RFC 2460, describes the concept of a packet, addessing for those packets, and the role of hosts and routers. The end objective of IPv6 like IPv4 is to enable devices forward packets sourced by hosts through multiple routers so that they arrive at the correct destination. However, because IPv6 affects several other functions in a network as well beyond addressing and packet forwarding, many more RFCs must define other details. For example, some RFCs describe how to migrate from IPv4 to IPv6, while some other RFCs define newer versions of familiar IPv4 protocols for IPv6:

IPv6 is a layer 3 routing protocol and defines a header that holds both the source and destination address fields, just like IPv4. The IPv6 header is not similar to the IPv4 header and the differences are more than just bigger source and destination addresses. The IPv6 header is bigger in size compared with the IPv4 header, though it is otherwise simpler for the sake of reducing the computational overhead on routers that process IPv6 packets. The following diagram displays the IPv6 header: 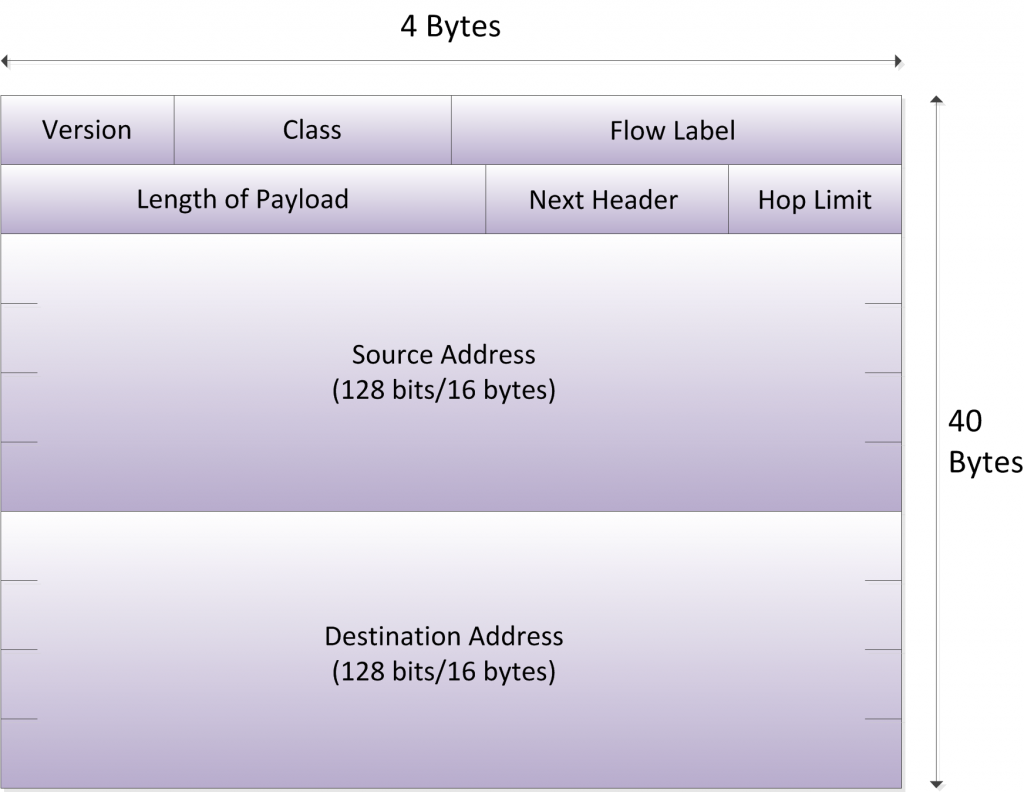 There are three types of IP version 6 (IPv6) addresses:

Just like IPv4, IPv6 addresses of all types are assigned to interfaces, not nodes. The IPv6 unicast address of any of a node’s interfaces can be used as an identifier for that node.

A single interface may have multiple IPv6 addresses of any type (unicast, anycast, and multicast) and scope.

Representation of IPv6 Addresses and Prefixes

An example of an IPv6 address is:

The same IPv6 address can also be written as:

There must be at least one digit in every group of four digits. That is the reason, the groups with all four zeros in the mentioned address are replaced with a single zero.

In order to make writing IPv6 addresses with long strings of zero bits easier, a method is available to compress zeros. The special symbol :: can be used to represent one or more adjacent groups of 16 bits of zeros. The symbol :: can appear only once in an address though. The :: can also include leading zeros after the last group of 16 zero bits, or before the first group of 16 zero bits. For example, the same address we mentioned can be squeezed further as:

IPv4 divides its address space into three classes: A, B, and C. IPv6 does not have a concept of classful networks like IPv4. IPv6 subnets or prefixes can be of arbitrary length without any classful boundaries. An IPv6 address prefix is represented by:

For example, the following are four different but valid representations of the 64-bit prefix 20010DB80000ABCD:

IPv6 global unicast addresses are similar to public IPv4 addresses. These addresses are allocated by the Internet Assigned Numbers Authority (IANA) to the Regional Internet Registries (RIRs). RIRs have the task of allocation to services providers and other local registries. IANA maintains an official list of the current state IPv6 address allocation at http://www.iana.org/assignments/ipv6-address-space/ipv6-address-space.xhtml

IPv6 unique local addresses are similar to private IPv4 addresses. These addresses can be used by companies that do not plan to connect to the Internet, and companies that plan to use IPv6 Network Address Translation (NAT).

These addresses are readily available, and you can simply read documentation and start assigning IPv6 addresses without worrying about registration with IANA or another authority. Multiple companies can possibly end up using the exact same IPv6 unique local addresses, and it works just fine just like private IPv4 addresses.

Key Concept IPv6 unique local addresses are only locally significant and don’t have to be globally unique, just like IPv4 private addresses.

Because the number of addresses that sit within the global unicast address space is astonishingly large, IANA does not assign prefixes from all over the address range.

The type of an IPv6 address can be identified by the initial bits of the address, as explained in below table.

The general format of global unicast address is shown in Figure 13-2.

The format of link-local addresses that are for use on a single link is given in Figure 13-3.

Link-local addresses are supposed to be used for addressing of a single link for purposes such as automatic address configuration and neighbor discovery. Routers do not forward packets with link-local source or destination addresses to other links, thus respecting and enforcing link-local scope of these addresses.

Site-local addresses were originally designed to be used for addressing inside a site without the need for a global routing prefix. They are now deprecated.