This section discusses the concepts and implementation of OSPFv3 in somewhat detail due to greater emphasis on IPv6 in CCNA version 2 exams.

The following steps are involved in the OSPFv3 configuration on a Cisco router:

In addition to the four steps, you may also configure one or more OSPFv3 interfaces as passive using the passive-interface interface-type interface-number command in router configuration mode.

We will present complete IPv6 configuration, including addressing and OSPFv3, on three routers in a single-area OSPFv3 domain, as shown in Figure 13-6. 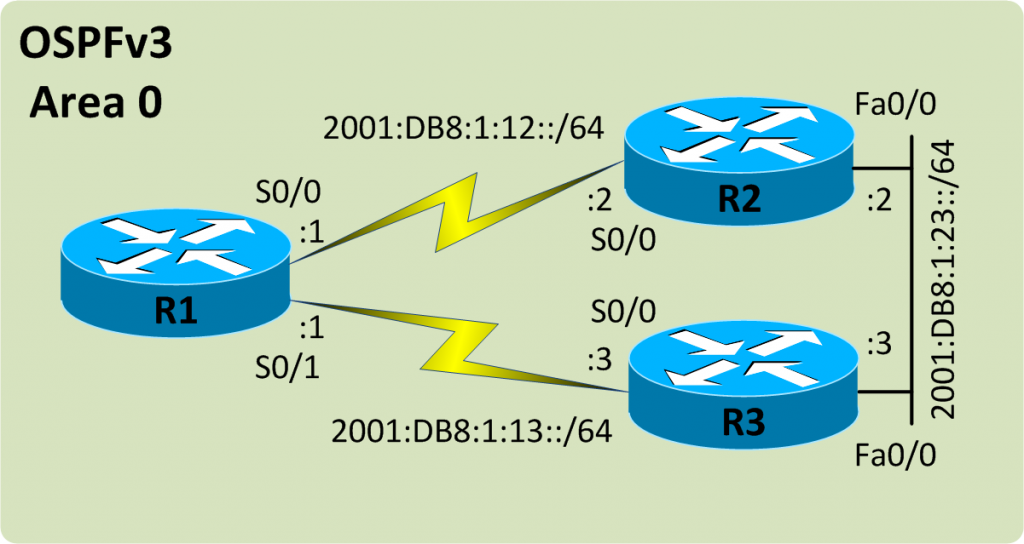 The following configuration steps are performed on each router, in accordance with Figure 13-6:

The ipv6 ospf process-id area area-id enables OSPFv3 on individual interfaces also assigning the area number. In this case, we are configuring a single-area OSPFv3 domain so all interfaces in all routers are placed in area 0, the backbone area.

There is one completely optional feature that is relevant to your CCNA version 2 exams: OSPFv3 passive interface. This feature is quite similar in concepts and configuration to its OSPFv2 counterpart. If you want a router not to form OSPFv3 neighbor relationships on an interface, that interface may be made passive. In this case, we do not want any interface to passive as we want each router to make two OSPFv3 neighbor relationships, so there is no passive interface configuration.

Finally, you need to configure OSPFv3 RID (router ID) to identify the router in the OSPFv3 routing domain. In this case, we set the OSPFv3 router ID on all three routers using the router-id command in router configuration mode.

We will now build on the single-area configuration to create a multi-area OSPFv3 configuration as shown in Figure 12-x. The router R1 is the ABR (area border router), with OSPFv3 process ID 1, and OSPFv3 enabled on four interfaces:

There is nothing in the configuration of R1 that explicitly sets it as ABR. We will configure interfaces of R1 in different OSPFv3 areas automatically making R1 and ABR. We will also configure FastEthernet0/0 of R1 as passive because there are no OSPFv3 routers off this interface and R1 will not make any neighbor relationships on this interface any way.

We add two OSPFv3 areas and a single OSPFv3 router R4 to the single-area scenario presented in the last section, as shown in Figure 14-7. You have to perform additional configuration on FasEthernet0/0 and FastEthernet0/1 of R1. You also have to configure R4 from scratch assigning OSPF areas to interfaces as shown in Figure 13-7. We will configure FastEthernet0/0 of R4 as passive as there are not any OSPFv3 neighbors off this interface.

The core OSPFv3 configuration is complete by now. However, we will configure some additional OSPFv3 features that are very similar to corresponding OSPF features for IPv4.

OSPFv3 is very much like OSPFv2 when it comes to calculation of route metric, with minor differences in concepts, configuration commands, and verification commands.

The SPF (shortest path first) algorithm on a router finds all possible routes to a subnet and then calculates the cost of each route by adding the OSPF interface cost for all outgoing interfaces on the path from the router to the subnet. You can influence OSPFv3 route selection using methods that are just similar to the corresponding rules for OSPFv2:

The OSPFv3 load balancing concept is again similar to the corresponding OSPFv2 concept. Also, the exact same command is used to make equal-cost load balancing happen. When an OSPFv3 router has multiple routes to reach one subnet, each with the same metric, the router can put multiple equal-cost routes in the routing table. The maximum-paths number command is used in router configuration mode to define just how many such routes can be added by OSPFv3 to the IPv6 routing table. For example, if a network has six equal-cost routes, and you want all routes to be used, you should configure the router with maximum-paths 6 subcommand under the ipv6 router ospf command.

If a company has a single IPv6 enabled Internet connection, it can use a default IPv6 route to send all IPv6 traffic out that one link to the Internet. All the internal routers need to send traffic to the single Internet facing router:

The default-information originate command is used in OSPFv3 configuration mode to originate a default route from the router facing the Internet. The IPv6 default route is represented as ::/0 with a prefix length 0, and it is analogous to the 0.0.0.0/0, the default route used with IPv4.

This completes our discussion of OSPFv3 configuration. You may have noticed that we frequently referred to OSPFv2 when introducing OSPFv3 concepts. The reason was that OSPFv3 is so similar to OSPFv2 with certain differences in some areas. It is probably the right time to recap the similarities and differences between OSPFv3 and OSPFv2.

You understand now how similar the two protocols are, but still they are not exactly the same. There are many differences as presented in the following list, but the good news for you as a CCNA candidate is that most of the differences are outside the scope of this book and your CCNA exams:

So, as you can see there are more similarities than differences and the few differences that exist are also out of scope for your CCNA exams. So you can reuse most of your OSPFv2 concepts for OSPFv3.

In the next section, we will cover OSPFv3 verification and troubleshooting with associated concepts.

The OSPFv3 show commands used for verification and troubleshooting are also very similar to OSPFv2 commands mostly the ip keyword getting replaced by ipv6. When the OSPFv3 process first comes up on a router, the IOS reads the OSPFv3 configuration and then enables OSPFv3 on interfaces. So, we will start our OSPF verification and troubleshooting by examining OSPFv3 interfaces. If the interfaces look good, you can move on to OSPFv3 neighbors, and then to the OSPFv3 topology database, and finally to OSPFv3 routes added to the IPv6 routing table.

For verification and troubleshooting examples, we will use the OSPFv3 multi-area topology presented and configured earlier in this chapter.

The ip ospf process-id area area-id command is used in interface configuration mode to make OSPFv3 run on an interface. You can quickly scan the output of show running-config to identify the OSPFv3 interfaces as well as the area number for each.

You can be much more effective at verification and troubleshooting by using the respective show commands than trying to read the configuration. And that’s not the only reason to favor specific show commands over the show running-config command. Many simlet questions on the CCNA exams do not even let you into the enable mode of the router, so you just cannot use the show running-config command to see the configuration. So, if you think your good configuration skills alone can help you verify and troubleshoot OSPFv3 for CCNA, think again.

There are three show commands that can provide you useful information about interfaces enabled for OSPFv3:

All three commands list the interfaces, both non-passive and passive, on which OSPFv3 has been enabled, but with different level of details. In our case, there is no passive interface, but you can make any interface passive by using the passive-interface command in interface configuration mode.

As you can see from the output of show ipv6 protocols command above, four interfaces of R1 with associated areas are listed.

Most OSPFv3 problems are caused by mistakes in configuration that prevent routers from making neighbor relationships. Some of the configuration mistakes you can encounter are:

As soon as you make FastEthernet0/1 passive, the neighbor relationship with R4 is lost. That’s the reason you should make only that interface passive that has no other OSPFv3 routers connected to it.

The OSPFv3 neighbors also function like OSPFv2 neighbors following course. The same concepts, message names, and neighbor states are used by OSPFv3. In this section, we look at issues related to OSPFv3 neighbor relationships, especially the issues that prevent routers from becoming neighbors.

When you are examining the output of debug commands we present, do not get overwhelmed by details, as you don’t have to understand all of them at this point. Just focus on the highlighted portions for relevant and familiar concepts. First, we show the output of debug ipv6 ospf adj command executed on R1, which lists OSPFv3 adjacency messages as the router marches through various adjacency states with R4 off interface FastEthernet0/1. We highlight some of the OSPFv3 neighbor states like 2-way, exstar, exchange, loading, and full that is final desired state.

We can use the show ipv6 ospf neighbor command to confirm if R1 has established neighbor relationship with R4.

As you can see, R4 has stabilized in a full neighbor state with R1. In fact working OSPFv3 neighbors, just like OSPFv2) will stabilize in either a full state or a 2-way state. A neighbor reaches full state when it has fully exchanged its LSDB (link-state database) to/from a neighbor. However, for OSPF network types that use a DR (designated router) or BDR (backup designated router), only the DR and BDR reach full neighbor relationships with DROthers (routers that are neither DR nor BDR). Neighbor relationships between two DROther routers will stabilize in a 2-way state only and will not reach the full state.

OSPFv3 routers exchange their LSDBs, made up of LSAs (link-state advertisement), as part of the OSPFv3 adjacency establishment process. Once the two routers are in the full state, they should have exactly the same LSAs for that area in their LSDBs. In this section, we take a brief look at the LSDB and LSAs in an area and also some configuration issues that can cause the LSA exchange process to fail prematurely.

OSPFv3 uses the Type 1 router LSA and Type 2 network LSA to define the topology inside an area just like OSPFv2. The Type 3 LSA describes an inter-area subnet, that is, a subnet that exists in some other area. OSPFv3 renames the Type 3 LSA to inter-area prefix LSA as compared to OSPFv2. For the sake of your CCNA exams, you are normally concerned with only these three types of LSAs:

The following graphic demonstrates these LSA concepts for area 14 in the multi-area OSPFv3 topology presented earlier in the chapter. 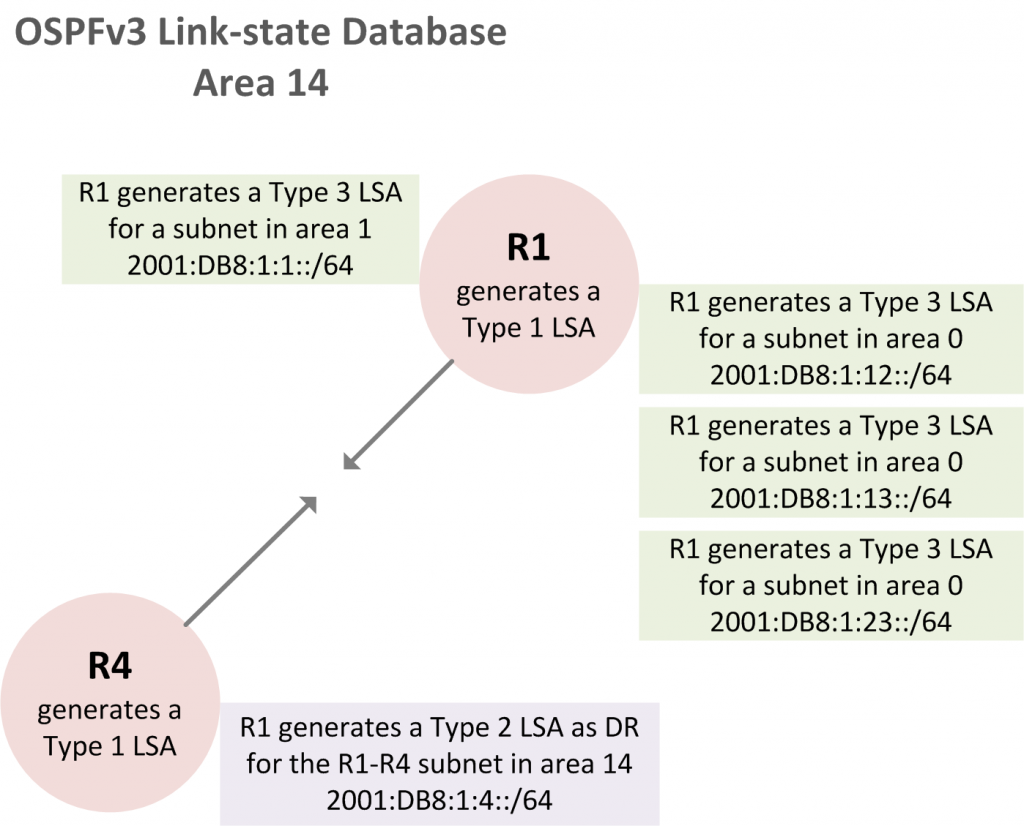 R1 and R4 are the only two routers in area 14 and each generates one Type 1 LSA. There is a single subnet (between R1 and R4) in area 14 that has a DR, so a single Type 2 LSA is generated by the DR, that is, R4 for that subnet. Finally, the router R1 being the ABR generates four Type 3 LSAs into area 14 to represent four subnets (prefixes) in areas 0 and 1 .

You can actually view the LSAs shown in the graphic above using the show ipv6 ospf database command:

OSPFv3 is a dynamic routing protocol for IPv6 and all the end goal of OSPFv3 like any other routing protocol is to have viable routes that you can actually install in the routing table for actual forwarding of packets.

The SPF algorithm considers all the paths or routes available on the local router to reach each and every subnet. When there are more than one available routes on the local router to reach a remote subnet, the SPF algorithm must select the best route based on the lowest metric. The best route selected by OSPFv3 on the basis of lowest metric is then added to the IPv6 routing table.

The router R1 has two routes to the IPv6 subnet 2001:DB8:1:23::/64, as shown in the above output. One route goes through R2 off interface Serial0/0 while the other goes through R3 off interface Serial0/1. The default setting of maximum-paths 4 allows for up to four equal cost routes to be installed in the routing table. There is no surprise that two routes to the subnet can be seen in the IPv6 routing table of R1. You may have noticed that link-local addresses for the next hop are used in the routing table.