Cisco designed the new EIGRPv6 (EIGRP for IPv6) to be almost identical to EIGRPv4 (EIGRP for IPv4). The IPv4 and IPv6 versions of EIGRP are even closer to each other than the two corresponding versions of OSPF. EIGRPv6 has to be enabled on all routers in the network just like EIGRPv4. EIGRPv6 then exchange messages allowing the routers to discover neighbors, form neighbor relationships, and finally advertise subnets along with the metric components for each route. EIGRPv6 also has the same successor and feasible successor (FS) concepts. 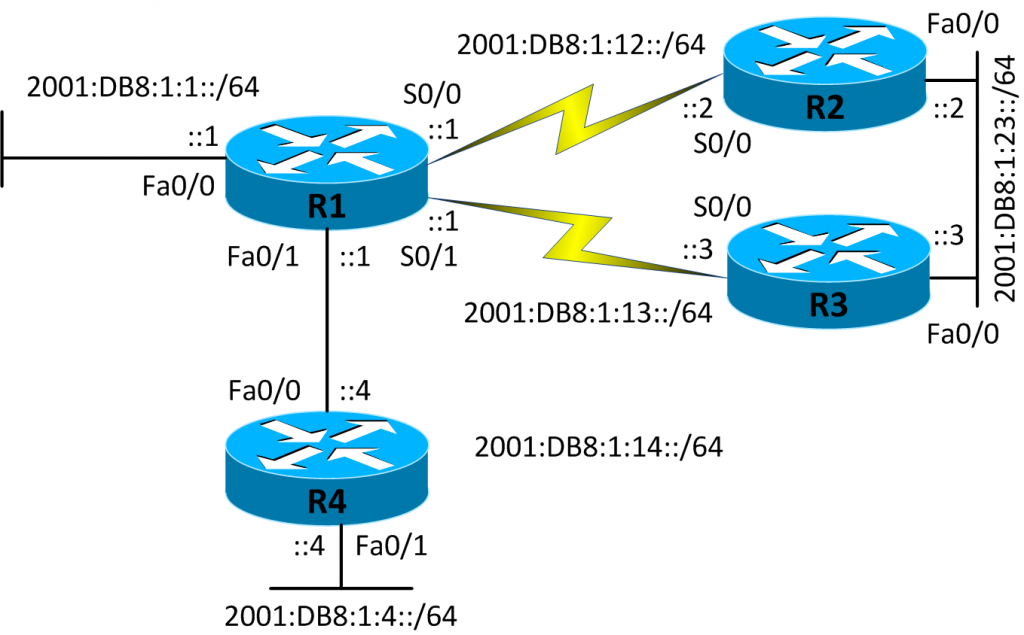 You should carefully review the configuration for each router shown above. The number used in the ipv6 router eigrp asn command is the ASN (autonomous system number) and not the process ID as used by OSPFv3. The ASN must match for all the routers in the routing domain or autonomous system (AS). We have used the number 1 for the ASN on all routers. After this, all routers must explicitly set the RID (router ID) using the eigrp router-id command in router configuration mode. EIGRPv6 also uses a 32-bit RID llike OSPFv3, with identical rules for how the router picks the value. The rest of the configuration simply enables EIGRPv6 on all interfaces using the ASN to associate with the interface, using the ipv6 eigrp asn command.

We have covered the core configuration of EIGRPv6 so far. In this section, we are going to cover several additional configuration options for EIGRPv6.

EIGRPv6 uses the exact same parameters, specifically the interface bandwidth and delay, which are used by EIGRPv4 to calculate the metric for each route. The IOS configuration commands to set those parameters, specifically the bandwidth and delay commands used in interface configuration mode, are also the same for EIGRPv4 and EIGRPv6. The similarities do not end here and the exact same formula is used by EIGRPv4 and EIGRPv6 to calculate the metric for a route.

Let us consider a design with all the routers are dual-stack running both IPv4 and IPv6, with EIGRPv4 and EIGRPv6 enabled on all interfaces. In some conditions, the EIGRPv4 metric for a route to an IPv4 subnet will be the same as the EIGRPv6 metric from the same router to an IPv6 subnet in the same location.

In the above example, we have set the Hello timer equal to 3 and 5 seconds for EIGRPv6 and EIGRPv4 respectively. Please note that these values are absolutely arbitrary and will likely have the same values for both EIGRPv4 and EIGRPv6 in a real network.

There are lot more similarities than differences, so it makes sense to list the few differences that exist between the two protocols. The list is pretty short:

In this section on EIGRPv6 verification and troubleshooting, we follow the same sequence that is used by EIGRPv6 itself when bringing up the EIGRPv6 routing process. We will examine EIGRPv6 interfaces, neighbors, topology and finally routes installed by EIGRPv6 in the IPv6 routing table.

The verification and troubleshooting examples in this section will all use the topology shown earlier, composed of routers R1, R2, R3 and R4.

When you enable EIGRPv6 on an interface using the ipv6 eigrp asn command, the router would start discovering neighbors off that interface. The first step in EIGRPv6 verification would be to make sure it is enabled on all the right interfaces. One of the most common problems associated with EIGRPv6 probably is that it is not enabled on an interface.

Before we jump into the specifics of relvent show commands here, let’s first make FastEthernet 0/0 of R1 a passive interface.

You may use the show ipv6 eigrp interfaces command to verify if EIGRPv6 has been enabled on correct interfaces:

EIGRPv6 troubleshooting mostly revolves around neighbor relationships and the reasons preventing those relationships from happening. You may revisit the EIGRPv6 configuration earlier in the chapter at this point and note that we used the ipv6 eigrp 1 command under interface FastEthernet0/0. There are no other EIGRPv6 routers reachable off FastEthernet0/0 of R1 and the omission of ipv6 eigrp 1 command from FastEthernet0/0 will not impact any EIGRPv6 neighbors. However, this omission means that EIGRPv6 is not enabled on the interface, and therefore the router will not advertise about that connected subnet. As a result, the rest of the routers in the topology will not be aware of the subnet and will not be able to route packets to the subnet.

You may display the IPv6 routing table of R1 again, and the subnet corresponding to FastEthernet0/1 of R4 will no longer be listed

You have to understand which parameters must match for EIGRPv6 routers to become neighbors, in order to troubleshoot EIGRPv6 neighbor relationships. EIGRPv6 uses the same list of parameters as EIGRPv4 except one difference. EIGRPv6 does not require neighbors to be in the same subnet as EIGRPv4 does.

You have to check all these conditions, if EIGRPv6 routers are not able to become neighbors. The show ipv6 protocols commands lists a lot of useful information for troubleshooting EIGRPv6, including ASN (autonomous system number), K-values, and EIGRPv6 interfaces.

Once two EIGRPv6 routers become neighbors, they should exchange all appropriate network topology information. EIGRPv6 uses bandwidth, delay, reliability and load as metric components just like EIGRPv4. The metric calculation formula used by EIGRPv6 is also identical to the one used by EIGRPv4. The best route to a network is known as successor router to EIGRPv4 and EIGRPv6 retains the concept. The FS (feasible successor) is a route that meets the feasibility condition and can potentially become the successor route if the successor route fails. EIGRPv4 and EIGRPv6 both have the same concept of FS route. The feasibility condition dictates that the reported distance (the composite metric reported by a neighbor to reach a subnet) is better (lower) than the currently best metric (successor metric) to reach the same subnet.

The output of show ipv6 eigrp topology command executed on R1 is show below:

The highlighted part in above output provides loads of useful EIGRPv6 topology information. The remote subnet 2001:DB8:1:4::/64 is in passive state as indicated by code P. The passive state is the desired stable state of EIGRPv6 routes. The subnet has one successor, which has an FD (feasible distance) of 307200. The subnet is reachable via next-hop link-local IPv6 address FE80::C003:10FF:FECC:0. The two numbers 307200/281600 listed in round brackets represent the FD (metric) and the RD (reported distance) respectively. The subnet is reachable off local interface FastEthernet0/1.