The previous two chapters helped you learn the basics of networking. You are aware of various layers of the OSI and TCP/IP models and the devices that work on these layers, especially routers and switches. The rest of the book focuses on various functions of Cisco routers and switches. So before moving to the various functions, it is necessary to know what makes them tick. This chapter is dedicated to Cisco Internetwork Operating System (IOS). Cisco IOS is a proprietary operating system that Cisco routers and switches run on. This chapter looks at the boot process, connectivity options, ways to configure the devices and show basic configuration and verification commands.

Cisco provides various series and models of routers geared towards different types of customer and requirements. Some of them just do routing whereas others provide some other functions such as Wireless connectivity, Security features and Voice-over-IP services. Cisco’s ISR series routers are example of routers that provide various services.

The earlier CCNA exams used to focus on Cisco 2500 and 2600 routers that have been replaced by ISR 1800 and 2800/2900 series routers. 2500 and 2600 routers are End-of-Life now and cannot be bought from Cisco anymore. Figure 3-1 shows a part of the backplane of a Cisco 1841 router with important parts labeled. These parts are described in Table 3-1. Figure 3-2 shows the front panel of the router.

Exam Alert: CCNA is not a device specific exam. You can practice using a 2500 or 2600 router or even a 3800 series ISR router. Every command and concept discussed in this book holds true for all of these routers. The only difference that you need to be aware of is the output difference in memory, interface type (Ethernet or FastEthernet) and number of interfaces

Table 3-1 Rear components of the router

Exam Alert: As with routers, you can use any switch model as long as it runs IOS when studying for your CCNA exam. I suggest practicing with either a 2950 or a 2960 switch. If your budget can afford one, a 3550 or 3560 Layer 3 switch can be used with its enhancements.  But stay away from the 4000 or 6000 series switches.

Each model in the 2960 series switch is different in terms of the number of physical network interfaces it has but overall each model looks similar. Figure 3-3 shows the front faceplate of the switch. The back of the switch only consists of the AC power input.

Table 3-2 Backplane components of a router

Cisco IOS (different from Apple’s iOS) is a proprietary kernel which controls all functions of a Cisco router and most switches. Cisco IOS is based on the operating system created by William Yeager at Stanford University between 1980 and 1986. Cisco licensed Yeager’s work and created the IOS out of it. The Cisco kernel allocates resources and manages things such as low-level hardware interfaces and security.

Some important items that the Cisco router IOS is responsible for include:

Apart from the routing, switching, telecommunications and security functions, the IOS also provides a Command Line Interface (CLI) for configuration, management, monitoring and troubleshooting. The CLI can be access using the console port, the auxiliary port (if it is available) and Telnet or SSH. Telnet or SSH access requires IP connectivity, hence the initial configuration requires you to access the device using the console port.

The rest of the chapter is dedicated to connecting to the CLI and basic configuration.

Connect the serial connector end to the serial port of your PC and the RJ45 connector to the console port of the router or switch. After the physical connection, you will need to use software known as a Terminal Emulator to connect to the CLI. HyperTerminal is an example of a Terminal Emulator that comes pre-installed on some Windows systems. If you do not have HyperTerminal on your Windows PC, you may want to download PuTTY which is a free terminal emulator.  Minicom is a free terminal emulator for Unix based operating systems. 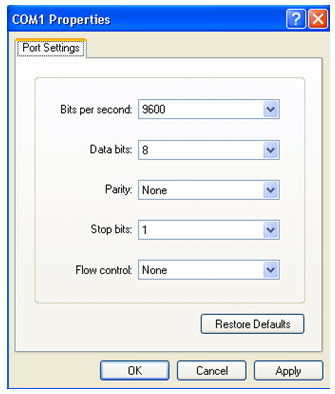 Launch your terminal emulator and configure it to connect to the serial interface using the following settings:

Figure 3-4 shows Hyperterminal configured to use the above settings.

Booting Up a Router or a Switch

When you power up a Cisco router or a switch, it first runs the Power-On Self-Test (POST). After POST the device looks for and loads the Cisco IOS from flash memory. Flash memory is an Electronically Erasable Programmable Read-Only Memory (EEPROM). When the IOS loads, it looks for the configuration file in the non-volatile RAM or NVRAM. Take a look at the booting process of a Cisco Router shown below. The following output is from an 1841 router.

The first part above shows information regarding the bootstrap program that runs the POST and then tells the router to load IOS. By default the location of the IOS is the flash memory. The next part shows the IOS image being decompressed. The pound sign shows the progress of the decompression process.

After decompression, the IOS is loaded in the RAM and starts to run. During the startup a lot of information is shown. In the output below notice the IOS version shown as 12.4(25e).

Once IOS has completely loaded, it will display important information about the router that was learned during POST and booting. You can see the make of the router, the flash and RAM size as well as various interfaces and modules connected as you can see below:

The output above shows that the 1841 Cisco router has a total memory of 128MB RAM, 191KB of NVRAM and 32MB of Flash. It also has 2 FastEthernet Interfaces.

Once IOS is loaded, it will copy the saved configuration, called the startup config, from the NVRAM into the RAM. This copy is known as the running config.

Exam Alert: The boot up sequence and type of messages will be similar across all routers. The only noticeable differences will the reported size of RAM, NVRAM, flash and the number/type of interfaces.  Expect to see this type of output in your CCNA simulation exam questions.

The boot process of a Cisco catalyst switch is similar. The following outputs show the messages that appear when a 2950 switch is booted up.

The above message shows the bootstrap program running. The output below shows the IOS being decompressed and then loaded into the RAM.

After the IOS is decompressed, the IOS version is displayed. Note the version displayed below is 12.1(22)EA6.

After IOS loads, it runs POST on various components of the switch as can be seen below.

After the last POST is passed IOS completes loading and displays the information learned during the POST. The output is similar to the one displayed when the router completes booting and provides information regarding the device.

The output above shows that the 2950 switch has 20MB of RAM and 32KB of flash. There are 24 FastEthernet interfaces and 2 Gigabit Ethernet Interfaces in the switch. Just as in the case of the Router, once IOS has loaded, it will copy the startup config into the RAM as running config.

— System Configuration Dialog —
Would you like to enter the initial configuration dialog? [yes/no]:
% Please answer ‘yes’ or ‘no’.

You will not be going through the setup mode since CCNA is all about configuring the switches and the routers using the CLI.

Table 3-3 sums up all the components and their functions that you learned about in this section.

Note: The rest of the chapter is dedicated to basic configuration using the CLI and the commands and concepts apply to both a router and a switch, unless specifically mentioned otherwise.  The CCNA exam only uses the CLI and no GUI at this time.