Open Shortest Path First (OSPF) is the first link-state protocol that you will learn about. Apart from being a link-state protocol, it is also an open standard protocol. What this means is that you can run OSPF in a network consisting of multivendor devices. You may have realized that you cannot run EIGRP in a network that consists of non-Cisco devices. This makes OSPF a very important protocol to learn.

Compared to EIGRP, OSPF is a more complex protocol and supports all features such as VLSM/CIDR and more. A brief summary of OSPF features is given below:

While the above list is a very basic overview of the features of OSPF and will be expanded on in coming sections, it is a good time to take a step back and compare the four protocols detailed in this chapter. Table 5-2 shows a comparison of the four protocols.

It should be noted here that OSPF has many more features that the ones listed in Table 5-2 and than those covered in this book. One feature that really separates OSPF from other protocols is its support of a hierarchical design. What this means is that you can divide a large internetwork into smaller internetworks called areas. It should be noted that these areas, though separate, still lie within a single OSPF autonomous system. This is distinctly different from the way EIGRP can be divided into multiple autonomous systems. While in EIGRP each autonomous system functions independent of others and a redistribution is required to share routes, in OSPF areas are dependent on each other and routes are shared between them without redistribution.

You should also know that like EIGRP, OSPF could be divided into multiple Autonomous Systems. Each autonomous system will be different from the rest and will require redistribution of routes.

The hierarchical design of OSPF provides the following benefits:

One disadvantage of this is that planning and configuring OSPF is more difficult than other protocols. Figure 5-5 shows a simple OSPF hierarchical setup. In the figure notice that Area 0 is the central area and the other two areas connect to it. 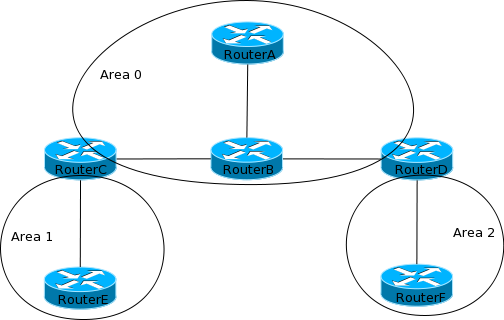 This is always true in an OSPF design. All areas need to connect to Area 0. Areas that cannot connect to area 0 physically need a logical connection it using something known as virtual links. Virtual links are out of the scope of the CCNA exam.

Another important thing to notice in the figure is that for each area, there is a router that connects to area 0 as well. These routers are called Area Border Routers (ABRs). In Figure 5-5, RouterC and RouterD are ABRs because they connect to area 0 as well as another area. The way ABRs connect different areas, routers that connect different autonomous systems are called Autonomous System Boundary Routers (ASBRs). In Figure 5-5, if RouterE connect to another OSPF AS or to an AS of another protocol such as EIGRP, it would be called an ASBR.

From Figure 5-5, you learned about three OSPF terms – Area, ABR and ASBR. Similarly there are many other terms associated with OSPF that you need to be aware of before getting into how OSPF actually works. The next section looks at some of these terms.

Each routing protocol has its own language and terminologies. In OSPF there are various terms that you should be aware of. This section looks at the some of the important terminologies associated with OSPF. In an attempt to make it easier to understand and remember, the terminologies are broken into three parts here – Router level, Area level and Internetwork level.

At the Router level, when OSPF is enabled, it becomes aware of the following first:

Let’s take a simple test here. Look at Figure 5-6 and try to find the Router ID and links on each of the routers.

Once a router is aware of the above two things, it will try to find more about its network by seeking out other OSPF speaking routers. At that stage the following terms come into use:

Once OSPF has discovered neighbors it will look at the network type on which it is working. OSPF classifies networks into the following types:

Exam Alert: It can get confusing to remember the network types, election and adjacency requirements. A simple way to remember it is to associate “multi-access” with DR/BDR and “Point-to” with no election. Also associate NBMA with manually specifying neighbors.

Once OSPF has formed adjacencies, it will start exchanging routing updates. The following two terms come to use here:

At the area level, the only term that gets introduced is:

At the internetwork level another term that gets introduced is:

Now that you are familiar with OSPF terminology, the rest of the sections will discuss the working of OSPF in detail and help you better understand the terms discussed here.

The interface number can be any number starting from 0. Once in the interface configuration mode, use the ip address command to configure an IP address as you would on a physical interface. An example is shown below:

That’s it! The loopback interface is configured and will be listed as an active interface in the show ip interface command.

DR/BDR Election and influencing it

As discussed earlier, in multi-access network types, DRs and BDRs are elected and routers in the area only form adjacencies with them. So DRs and BDRs are an important part of OSPF and usually determine how well OSPF will function. In this section you will learn about the process by which DRs/BDRs are elected. Before learning about the process, it is important that you understand the terms neighbors and adjacencies fully since they are central to functioning of OSPF and the election process.

A router running OSPF will periodically send out Hello packets to multicast address 224.0.0.5.  These hello packets serve as a way to discover neighbors. When a router receives these packets, it checks the following to ascertain that a neighborship can be established:

For a neighborship to form, the hello and dead intervals should match between the routers.

If all the three above conditions match, the router will add the neighbor into the neighbor table and form a neighborship. Even though a neighborship gets formed, OSPF unlike EIGRP will not share routing updates, or link state advertisements in this case, with every neighbor.

For OSPF to share link state advertisements, an adjacency must be formed between the routers. As discussed earlier, how adjacencies are formed depends on the network type. In a multi-access network, a DR and BDR will be elected and all routers in the network will form adjacency with them only. Each router will exchange LSAs with DR and BDR. DR in turn will relay the information to the rest of the routers.

As you know, the Router ID is the highest physical IP address present on a Router. This can be overridden by using a loopback interface because a router will use the highest loopback address, if one is present.

If you need to influence the DR/BDR election in a network segment, you can do one of the following:

Once OSPF exchanges link state advertisements and populates the topology table, each router runs a calculation on the information collected. These calculations use something known as the Shortest Path First (SPF) algorithm. To do so, each router creates a tree putting itself at the root of the tree and the other routers and networks form the branch and leaves. In effect the router puts itself at the start and the area branches out from it. Figures 5-7 and 5-8 show an example of how the SPF tree is created by a router. Figure 5-7 shows the SPF tree with RouterA as the origin while Figure 5-8 shows the SPF tree with RouterG as the origin. Notice how different the network looks from the perspective of each router. The benefit of each router creating this tree is that the shortest path can be found from each router to each destination and there is no routing by rumor as seen with distance vector protocols. 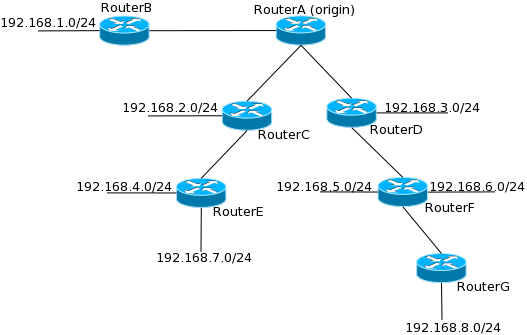 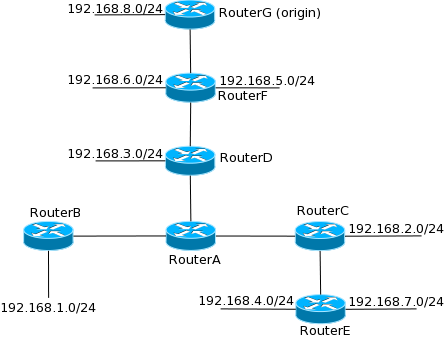 It is important to understand that each router creates this tree only for the area it belongs to. If a router belongs to multiple areas, it will create a separate tree for each area.

A big part of the tree is also the cost associated with each path. Cost is the metric used by OSPF is the sum of the cost of the entire path from the router to the remote network. The OSPF RFC defines cost as an arbitrary value, so Cisco calculates cost as 108/bandwidth. Bandwidth in this equation is the bandwidth configured on the interface. Using this equation, an Ethernet interface with a bandwidth of 10Mbps has a cost of 10 and a 100Mbps interface has a cost of 1. You may have noticed that interfaces having a bandwidth of more than 100Mbps will have a cost in fraction but Cisco does not use fractions and rounds of the value to 1 for such interfaces.

The cost of each interface can be changed using the ip ospf cost command in the interface configuration mode. It should be noted that since the OSPF RFC does not exactly define the metric that makes up the cost, each vendor uses a different metric. When using OSPF in a multivendor environment, you will need to adjust cost to ensure parity.

The fundamental building blocks of OSPF are the link state advertisements that are sent from every router to advertise links and their states. Given the complexity and scalability of OSPF, different LSA types are used to keep the OSPF database updated. Out of the various LSAs, the first five are most relevant to the limited OSPF discussion covered in this chapter and are discussed below: