The features discussed in the previous section – PortFast, UplinkFast and BackboneFast were added by Cisco and because of this they worked only on Cisco switches. IEEE added these features in a new STP protocol called Rapid Spanning Tree Protocol (RSTP) under the 802.1w standard.

One big different between 802.1D STP and 802.1w RSTP is that there are lesser number of port states. As you know, there are five states in 802.1D. RSTP only has 3 states. The disabled, blocking and learning states have been combined into a new discarding state in RSTP. Table 6-2 shows a comparison of the port states.

Figure 6-12 shows an example of a network with all port roles in RSTP. 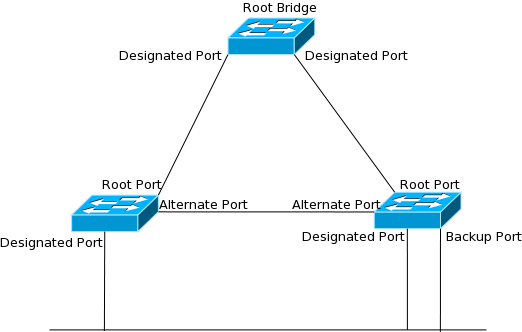 RSTP is backward compatible with 802.1D STP. If a switch with STP is discovered, the new features such as UplinkFast and BackboneFast will not be used.

Changing from 8021.D to 802.1w RSTP requires a single command on the switch – spanning-tree mode rapid-pvst. This is a global configuration mode command and will cause the switch to change to RSTP. Remember that this can cause the network to be temporarily unavailable. An example is shown below:

The change can be verified with the show spanning-tree command as shown below: