To understand the importance of current day switches, you need to understand how networks used to work before switches were invented. During mid to late 1980s 10Base2 Ethernet was the dominant 10Mbp/s Ethernet standard. This standard used thin coaxial cables with a maximum length of 185 meters with a maximum of 30 hosts connected to the cable. Hosts were connected to the cable using a T-connector. Most of the hosts at that time were either dumb terminals or early PCs that connected to a mainframe for accessing services.

When Novell became very popular in the late 80s and early 90s, NetWare servers replaced the then popular OS/2 and LAN Manager servers. This made Ethernet more popular, because Novell servers used it to communicate between clients and the server. Increasing dependence on Ethernet and the fact that 10Base2 technology was costly and slow lead to rapid development on Ethernet. Hubs were added to networks so that the 10Base5 standard could be used with one host and a Hub port connected on each cable. This led to collapsed backbone networks such as the one shown in Figure 6-1.

As you already know, networks made of only Hubs suffer from problems such as broadcast storms and become slow and sluggish. The networks of late 80s and early 90s suffered from the same problem. Meanwhile, the dependence on networks and services available grew rapidly. The corporate network became huge and very slow since most of the services were available on it and remote offices depended on these services. Segmenting the networks and increasing their bandwidth became a priority. With the introduction of devices called bridges, some segmentation was introduced. Bridges broke up collision domain but were limited by the number of ports available and the fact that they could not do much apart from breaking up the collision domains. 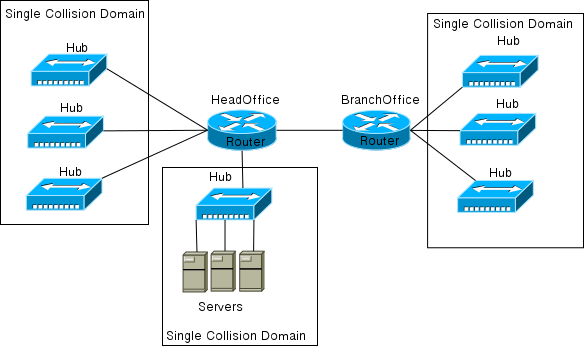 To overcome the limitations of bridges, switches were invented. Switches were multiport bridges that broke the collision domains on each port and could provide many more services than bridges. The problem with the early switches was that they were very costly. This prohibited connecting each individual host to a switch port. So after introduction of switches, the networks came to look like the one shown in Figure 6-2.

In these networks, each hub was connected to a Switch port. This changed increased the network performance greatly since each hub now had its own collision domain instead of the entire local network being a single collision domain. Such networks, though vastly better than what existed earlier, still forced hosts connected to hubs to share a collision domain. This prevented the networks from attaining their potential. With the drop in prices of switches, this final barrier was also brought down. Cheaper switches meant that each host could finally be connected to a switch port thereby, providing a separate collision domain for each host. Networks came to look like the one shown in Figure 6-3. Such networks practically had no collision.

Understanding Switches and their limitations

While switches are multiport bridges, these two devices have a significant difference. Bridges use software to build and maintain the switching and filtering tables while Switches use the hardware – more specifically application specific integrated circuits (ASICs) to build and maintain their tables. Both of these devices provide a dedicated collision domain on each of their ports but switches go a little further by providing the following features:

So what makes layer 2 switching this fast and efficient? The fact that layer 2 switching is hardware based and only looks at the hardware address in each frame before deciding on an action. Layer 3 routing on the other needs to look at Layer 3 header information before making a decision. You will remember from chapter 1 that the destination MAC address starts from the 9th byte of a packet and is 6 bytes long. So the switch only has to read 14 bytes when a frame is received. Figure 6-4 shows a frame.

Overall, using switches to segment networks and provide connectivity to hosts results in very fast and efficient network with each host getting the full bandwidth.

While switches increase the efficiency of the network, they still have the limitations discussed below:

Due to the above limitations, routers cannot be eliminated from the network. To design a good switched or bridged network, the following two important points must be considered:

While switches are just multiport bridges, there are many differences between them:

While different in some aspects, switches and bridges share the following characteristics:

Three functions of a switch

A switch at layer 2 has the following three distinct functions:

When a switch is first powered up it is not aware of the location of any host on the network. In a very short time, as hosts transmit data to other hosts, it learns the MAC address from the received frame and remembers which hosts are connected to which port.

If the switch receives a frame destined to an unknown address, it will send a broadcast message out of each port except the port that the request was received on, and then when the switch receives a reply it will add the address and source port to its database. When another frame destined to this address is received, the switch does not need to send a broadcast since it already knows where the destination address is located.

You can see how switches differ from hubs. A hub will never remember which hosts are connected to which ports and will always flood traffic out of each and every port.

The table in which the addresses are stored is known as CAM (Content-addressable memory) table. To further understand how the switch populates the CAM table, consider the following example:

The above exchange is illustrated in Figure 6-5.

The switch will store a MAC addresses in the CAM table for a limited amount of time. If no traffic is heard from that port for a predefined period of time then the entry is purged from memory. This is to free up memory space on the switch and also prevent entries from becoming out of date and inaccurate. This time is known as the MAC address aging time. On Cisco 2950 this time is 300 seconds by default and can be configured to be between 10 and 1000000 seconds. The switch can also be configured so as to not purge the addresses ever.

The CAM table shown above will be created for the network shown in Figure 6-6.

Note that the switch stores the Mac Address and the Port where the host is connected. Do not worry about the VLAN column at the moment; we will cover this in chapter 7.

On the other hand, if the switch does not know the destination MAC address, it will flood the frame out all active interfaces expect the interface where the frame was received on. Another situation where the switch will flood out a frame is when a host sends a broadcast message. Remember that a switched network is a single broadcast domain.

When it receives a frame from fa0/1 destined for a host with MAC address of 0014.c8ef.19fa, what will the switch do? Since the address is not known, switch will flood out the frame out all active interfaces except fa0/1. If a response is received from the destination host, the MAC address will be added to the CAM table.

In another example, if a host with MAC address of 0014.c8ef.20ae, connected to interface fa0/11 sends a frame destined to 0014.bc1e.76ab, the switch will add the source address to its CAM table and associate it with fa0/11. It will then forward the frame out fa0/1 since the destination address exists in the CAM table and is associated with fa0/1.

The CAM table of the switch will now look like the following:

Any delay in passing traffic is known as latency. Cisco switches offer three ways to switch the traffic depending upon how thoroughly you want the frame to be checked before it is passed on. The more checking you want the more latency you will introduce to the switch.

The three switching modes to choose from are:

Cut-through switching is the fastest switching method meaning it has the lowest latency. The incoming frame is read up to the destination MAC address. Once it reaches the destination MAC address, the switch then checks its CAM table for the correct port to forward the frame out of and sends it on its way. There is no error checking so this method gives you the lowest latency. The price however is that the switch will forward any frames containing errors.

The process of switching modes can best be described by using a metaphor.

Now imagine you are the security at the club, only this time you have to not only make sure that the picture matches the person, but you must also write down the name and address of everyone before they can enter. Doing it this way causes a great deal of time and delay and this is how the store-and-forward method of switching works.

Store-and-forward switching has the highest latency of all switching methods and is the default setting of the 2900 series switches.

Since cut-through can ensure that all frames are good and store-and-forward takes too long, we need a method that is both quick and reliable. Using our example of the nightclub security, imagine you are asked to make sure that everyone has an ID and that the picture matches the person. With this method you have made sure everyone is who they say they are, but you do not have to take down all the information. In switching we accomplish this by using the fragment-free method of switching.

This is the default configuration on lower level Cisco switches. Fragment-free, or modified cut-through, is a modified variety of cut-through switching. The first 64 bytes of a frame are examined for any errors, and if none are detected, it will pass it. The reason for this is that if there is an error in the frame it is most likely to be in the first 64 bytes.

The minimum size of an Ethernet frame is 64 bytes; anything less than 64 bytes is called a “runt” frame. Since every frame must be at least 64 bytes before forwarding, this will eliminate the runts, and that is why this method is also known as “runt-free” switching.

The figure below shows which method reads how much of a frame before forwarding it.

Preventing loops in the network

Having redundant links between switches can be very useful. If one path breaks, the traffic can take an alternative path. Though redundant paths are extremely useful, they often cause a lot of problems. Some of the problems associated with such loops are broadcast storms, endless looping, duplicate frames and faulty CAM tables. Let’s take a look at each of these problems in detail:

In the network shown in Figure 6-7, consider a situation where HostA send out a broadcast. The following sequence of events will then happen:

If multiple broadcasts are sent out to this network, each of them will endlessly be sent to every host in the network thereby causing what is known as a broadcast storm.

All of these problems can cause a switched network to come crashing down. They should be entirely avoided or at least fixed. Hence, the Spanning Tree Protocol was created to keep the network loop free. We will be discussing STP shortly.