The ultimate goal of switches is to carry frames from the source to the appropriate destination based on the destination Ethernet address in the frame header. Ethernet addresses, also known as MAC (Media Access Control) addresses, are 6 bytes or 48 bits in length, typically written in hexadecimal form. A Microsoft Windows system would list a MAC address as 12-34-56-78-9A-BC whereas a Cisco switch would list it as 1234.5678.9abc. They are merely different representations of the same MAC address.

The basic logic used by switches when forwarding frames is the key to understanding many enhanced switching concepts and is worth a quick review here. The forwarding logic differs based on the type of destination MAC address and on whether the destination address has been added to the MAC address table of the switch.

Figure 7-1 describes how known unicasts are propagated in a switched network. Host A sends a frame destined to host B which is forwarded by the intermediate switches to its final destination following the direction of the arrows. 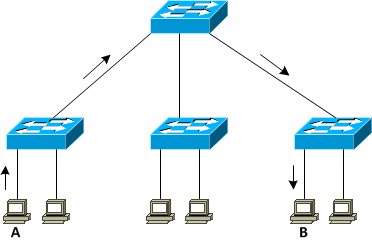 Figure 7-2 describes how unknown unicasts are propagated in a switched network. Host A yet again sends a frame destined to host B but this time intermediate switches do not yet have an entry for the MAC address of host B in their MAC address tables. Pay careful attention to the direction of arrows and note that the frame sent by host A is received by all hosts in the switched network including hosts connected to other switches. Only host A whose MAC address matches the destination MAC address of the frame would accept that frame while all other devices would reject it. It is not difficult to understand that a lot of bandwidth is wasted here because the frame is sent to every host on the switched network. The negative impact would be more significant in a larger switched network with several switches and possibly hundreds of host. 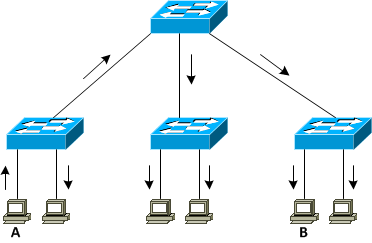 The switch sends a copy of the frame out all interfaces, except the interface on which the frame was received, identically to unknown unicasts. This switch behavior is also called frame flooding.

Figure 7-3 describes how broadcasts are propagated in a switched network. Host A sends a broadcast frame with the broadcast destination MAC address of FFFF.FFFF.FFFF and the frame is propagated to all hosts in the network even those connected to other switches. 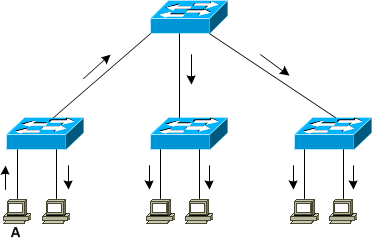 The switch floods frame identically to unknown unicasts and broadcasts, unless certain multicast optimizations are configured.

There are some problems with the way switches forward different types of frames by default, especially in larger switched networks. First, there is no isolation between hosts and any host can communicate with any other host totally unchecked. This is not a very desirable situation for you as a network administrator as there is no security from malicious software or users. Second, a broadcast sent by any host would reach every other host on the network which is neither bandwidth efficient nor secure. A malfunctioning Network Interface Card (NIC) or a piece of malicious software on a host can generate excessive broadcasts consuming all the bandwidth available and starving legitimate applications. These problems can be greatly alleviated by using virtual LANs or VLANs.