Firewalls are a very important component of any network security framework, and it is no surprise that Cisco offers firewall solutions in different shapes and forms:

The following sections describe these platforms in more detail.

A Cisco IOS firewall is a specialized feature of Cisco IOS Software that runs on Cisco routers. It is a firewall product that is meant for small and medium-sized businesses as well as enterprise branch offices.

The earlier Cisco IOS firewall feature was called Context-Based Access Control (CBAC), which applied policies through inspect statements and configured access control lists (ACL) between interfaces. The Zone-Based Policy Firewall (ZBPFW) is the newer Cisco implementation of a router-based firewall that runs in Cisco IOS Software. It was introduced in IOS Release 12.4(6)T and takes advantage of many new features that make the configuration and implementation of a firewall easire than was available previously. The following are some of the important features of a Cisco IOS Firewall: 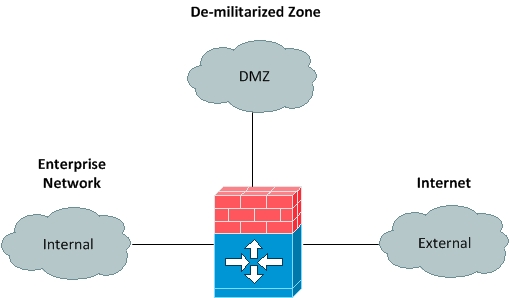 The Cisco PIX 500 series family of security appliances is an older series which consists of five models: the PIX 501, 506E, 515E, 525, and 535. These different models are designed to meet a range of requirements and network sizes. The Cisco PIX 500 series security appliance provides robust policy enforcement for users and applications, secure connectivity, and multivector attack protection. These appliances provide the following integrated security and networking services:

In January 2008, Cisco announced the End-of-Life for the PIX products. However, there is a large install base and Cisco will still be supporting this product until July 2013.

The Cisco Firewall Services Module (FWSM) is an integrated firewall module for high-end Cisco Catalyst 6500 switches and Cisco 7600 series routers used by large enterprises and service providers. You can install up to four FWSMs in a single switch chassis. Cisco FWSM is based on Cisco PIX firewall technology, and offers unmatched security, reliability, and performance.

Best practice documents are a useful resource as they put together the composite effort and experiences of practitioners. Here is a generic list of best practices for your firewall security policy, which you can use as a starting point:

In addition to various flavors of firewalls we covered in the last few sections, Cisco also produces some other security appliances and applications to meet specific enterprise security needs.

Cisco IronPort security appliances protect enterprises against internet threats, with a focus on email and web security, which happen to be two of the main sources of endpoint threats.

The purpose of Cisco Network Access Control (NAC) is to allow only authorized and compliant systems to access the network and to enforce network security policy. In this way, Cisco NAC helps maintain network stability. NAC provides four key features:

The Cisco NAC appliance condenses the four key NAC functions just described into a single appliance form and provides a turnkey solution to control network access. This solution is a natural fir for medium-scale networks that require a self-contained, ready-to-use solution. Cisco NAC appliance is especially ideal for organizations that need simplified and integrated tracking of operating system and antivirus patches and vulnerability updates. Cisco NAC appliance does not require a Cisco network to operate.

The goal of Cisco NAC appliance is to admit to the network only those hosts that are authenticated and have had their security posture examined and approved. The net result of such a thorough examination before allowing connectivity is a tremendous reduction in total cost of ownership (TCO) because only known, secure machines are allowed to connecte. Therefore, laptops that have been on the road for weeks and have possibly been infected or were unable to receive current security updates cannot connect into the network and unleash a Denial of Service (DoS) attack.

Non-compliant machines are redirected into a quarantine area, where remediation occurs at the discretion of the administrator.

Cisco Security Agent is a host intrusion prevention system (HIPS) product. It is software that is installed on a server, desktop, or point-of service computing systems and provides endpoint security by its threat protection capabilities. A single management console of Cisco Security Agent can support upto 100,000 agents, so it is a highly scalable solution.

However, if the request does violate the security policy, Cisco Security Agent blocks the request and takes the following actions:

Cisco Security Agent correlates this particular operating system call with the other calls made by that application or process, and correlates these events to detect malicious activity.