A company wanting to connect two (or more) of its sites can choose from several different types of WAN services: leased lines, Frame Relay, or more likely Multiprotocol Label Switching (MPLS) today. All these services are typcially expensive. However, another much cheaper option exists for connecting company sites to each other. Each site can simply be connected to the Internet using a broadband Internet access technology like digital subscriber line (DSL), cable, WiMAX, or even 3G/4G. Different sites then can send data to each other using the public Internet as a wide area network (WAN).

There is one problem with using Internet as a WAN though. The Internet is not as secure as other WAN options. The vulnerability of the Internet is, to a great extent, due to the fact that it is a public network. Just anyone with a computer can access the Internet and possibly attack any other computer. Other WAN options mentioned here are relatively secure. For example, in order to steal data flowing over a leased line, the attacker has to physically tap into the line with specialized equipment or be present at the telco central office. These actions are punishable by law and not easy for just anyone.

The possibility to use the Internet as a WAN is quite tempting despite the security concerns. Virtual private network (VPN) technology provides answers to the security questions associated with using the Internet as a private WAN service. In this chapter, we introduce you to the basic concepts and terminology related to VPNs. We then discuss details of two main types of VPNs: IP Security (IPsec) and Secure Sockets Layer (SSL).

VPNs have several advantages over other WAN technologies, some of which are summarized here:

A VPN is essentially a secure channel, often called a tunnel, between two devices or end points near the edge of the Internet. The VPN end points encrypt the whole of original IP packet, meaning the contents of the original packet cannot be understood by someone who even manages to see a copy of the packet as it traverses the network. The VPN end points also append headers to the original encrypted packet. The additional headers include fields that allow VPN devices to perform all their functions.

The graphic below and the explanation that follows should help you grasp basic VPN operation. 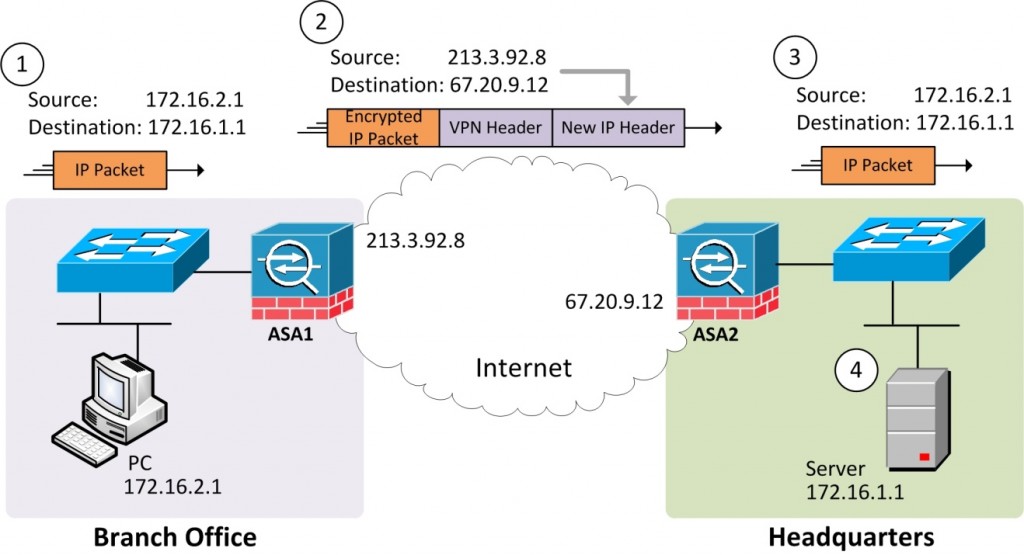 The steps in the above graphic are explained here: