In the simplest terms, IP Routing is the process of moving packets from its source to its destination across internetworks. To be able to route packets, a router must know at a minimum the following:

Unfortunately the process is not as simple as it sounds because it involves multiple protocols at multiple layers. To understand the complete process of how a packet moves from the source to the destination, consider the network shown in Figure 4-1. 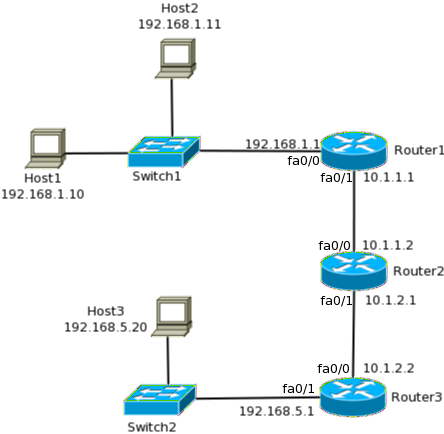 In the network shown above, when Host1 sends a TCP segment to Host3, the following happens:

The above steps show how a TCP segments moves from its source to its destination across an internetwork. The steps above assume that each router in the path knows where the destination network lies. But as you have seen in the previous chapter, a new router has no configuration and the router is not going to discover remote networks by itself. You will need to tell the router about the remote networks manually or configure it to learn the routes dynamically by talking to other routers.

Note: The network shown in Figure 4-1 will be used throughout the chapter. I strongly suggest you setup the above network and configure the basic connectivity. It will also allow you to practice everything learned in the previous chapter, once again.